Nocturnes on Silk By the Sea 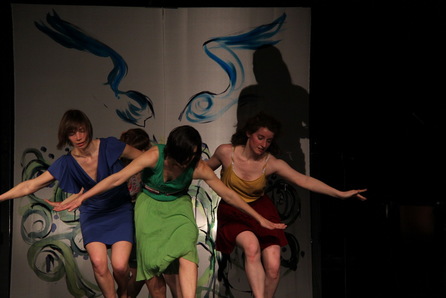 Last year’s Rite of Spring Fling! was designed as an homage to both the season of rebirth and the 100th anniversary of The Rite of Spring, one of the most influential works of art of all time.  This year, we aim to bring spring in with another exciting Mocean Dance piece choreographed especially for the evening, featuring a large-scale painting to be created live on stage by artist Holly Carr– all to live music accompaniment arranged and composed for the event.  Ms. Carr’s luscious, colourful, and inventive images have been created for Jazz East, Bust A Move, CBC’s Stuart McLean, Symphony Nova Scotia, and many more.  Last year’s memorable piece made for Rite of Spring! astonished our eventgoers, as they watched it unfold in tandem with a mesmerizing performance by Mocean Dance.

Music will Flow through Carr's Brush 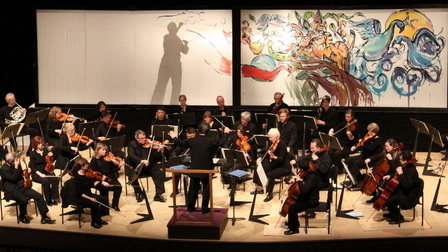 Music will flow through Carr’s brush like silk
While Symphony Nova Scotia plays, artist will paint a 32-by-eight-foot silk banner
By ELISSA BARNARD Arts Reporter
Thu. Feb 18 - 4:54 AM   For years Holly Carr drew in her symphony programs. This weekend she’ll be on stage with the symphony, painting a 32-foot (9.7-metre) silkscreen.
It’s a dream come true for the busy Nova Scotia artist, also opening a show of musically-inspired paintings at Argyle Fine Art tonight and performing her show, Women Only, March 4, at Pier 21.
"This is my dream project," she says, of Sunday’s hour-long concert-paint event at the Rebecca Cohn Auditorium. "When I started working with symphonies the idea was to go as big as I could go because the music is so big. I can literally feel it going through my body."

She has performed with the Winnipeg Symphony and the National Arts Centre orchestra, but the stages were too small to paint large.
On Sunday, Carr will be on a riser behind Symphony Nova Scotia and she will be behind a silkscreen that is 32 feet long and eight feet high. "I’m 5-10. If I wear a heel and stretch my arm, I can just reach eight feet."
Because she is backlit, the audience will see her as a silhouette as she moves her brush to the music.
"When I do it, it almost feels like I’m playing an instrument and I couldn’t play an instrument for the life of me, but I love music, so the thought of being part of a symphony is very exciting.
"I listen to rhythm and paint to rhythm," she says, talking on the phone Wednesday from her snow-blocked, mountainside home near Canning.
"Different sounds create different movements. If the music is fast and there’s lots of energy, the painting looks like that. There are lots of marks and crazy colours. It’s very intuitive.
"The colours end up all over the place but somehow it seems to work in the end. I marvel because I can’t believe it works. I’m so close to the screen I can’t see all of it."
Carr’s journey into performance began when she painted live and ad libbed monologue in Willpower Theatre’s production of Private Views at the Art Gallery of Nova Scotia. That led to an invite to fill in for an artist at a musical event at the Maritime Conservatory.
"This is not at all a new concept," says the lively mother of two.
"There are so many artists working with musicians in a variety of forms. I thought, ‘If I’m going to do this I would use silk’ and then I thought, ‘Wouldn’t it be fun to stretch a huge screen and backlight it.’
"I only had eight minutes and I didn’t know what I was going to do and it was an improvised piece of music and I started painting like crazy and I ended up with this cool imagery I didn’t expect and it was dripping and it was so immediate and then I fell in love with the project.
"I went to Scott Macmillan, a friend, and asked if he’d like to play with this and he was really open."
She has since painted on stage with symphonies and soloists, pop and rock bands. "You name it, poets, storytellers and all over Canada and outside Canada now," she says. "It’s been a real fun, fun ride and now it’s, ‘How big can I make it?’ "
For her art show at Argyle Fine Art she runs with the theme of music and circus for dense, vibrant, playful paintings that include actual musical notation from songs by Tom Waits, Stan Rogers, Queen, Elton John and Leonard Cohen.
"I can actually hear music when I see these paintings."
Passionate about red and green, and in this show, blue, Carr likes to load up and layer on colours on "heavy, heavy silk" using only a little water so she can get the colours to "pop."
Romeo and Juliet is a painting of a pair of ravens who have lived on Carr’s property ever since she and her husband, painter Alan Bateman, purchased it in 1990.
"And ravens mate for life."
However, one of the ravens is holding a blue robin’s egg in its mouth and will be destroying that life. As in the story of Romeo and Juliet, "there is a little bit of tragedy in there."
Carr’s lush and vegetative backgrounds are, in fact, not merely decorative, but hold a lot of meaning and emotion for her in their patterns and imagery. They are "wallpapers that remind me of my grandmother’s house" and amidst the rich flowers and vegetation she paints, the images of nature that she loves. She alone knows the symbolism in the literal images.
"It’s part of my story."
Carr, whose career has included books, sets for Mermaid Theatre and the huge 2003 Terrarium environment depicting the natural world that was installed at the Nova Scotia Museum of Natural History, never anticipated where her love of paint would take her.
"There was no ground plan. I feel so lucky and grateful for all of it, to be just having fun and exploring something new all the time, and when you open one door another door opens. I love that you don’t know what could happen, what can, if you stay open to the possibilities."